Janet Napolitano was "removed/resigned" from her Secretary of Homeland Security post because she did not reveal that she was a defendant in the lawsuit I brought.

How could someone who was part of a racket to legitimize illegal aliens and possibly financially gain from them be considered as the head of HS and be responsible for the protection of our borders?

The information was shown on this website and then checked out by some senators for its validity, the senators then presented a strong case for her removal to Obama.  He had to save face and could not keep her on, so now the California University System has her.  Adios California!

From 2003- 2009 Janet Nap0litan (I use a zero instead of an “o” because she is a zero) was Governor of Arizona.  Her policies during her governorship caused more harm to the people of Arizona than any governor before or since.  She never took her oath of office seriously.

Her policies, towards protecting the citizens of Arizona, was horrid.  She made a travesty of her oath of office as Governor of Arizona.  Out in public and backed by one of the most liberal newspapers in America, The AZ Repulsive, excuse me, Republic she would condemn the Bush administration for not securing the border, as his administration should have done.

The Governor could have put the Arizona National Guard on the border to close or control it.  Instead she put a small number of them on the border as “token” political move to make people think she was serious about protecting us.  She did this to shine a negative light on the Bush administration.  Now that she is Homeland Security Director what has she done, the same type of “Bait & Switch” policies she adhered to as Governor.

Behind the scenes Nap0litano worked with the Arizona Boxing Commission, John Montano, Mary rose Wilcox and others to bring Mexican felons into the U.S. using boxing licenses to legitimize their being in the U.S..  She also worked against the Sheriff Departments of several counties which were highly impacted by illegal aliens. Her policies of amnesty for illegals have a direct effect on the Arizona Citizens.  The case of Sunday Lyn Sharp is an example of Nap0litan’s policies causing harm and death to U.S. citizen.

The Sunday Lyn Sharp case is a sad one which has left a father, William Rucker, heartbroken and mad as hell.  The following are bio’s, official documents and public letters which have to do with Sunday Lyn Sharp’s death.

I have broken these down into sections so they will be easier to upload and read.  I will probably be adding sections in the future, but for now please start with the Sunday Lyn Sharp section.﻿﻿

The Schedule for Gov. Napolitano, Notice 5:30- 6:30 pm, she is the only AZ Gov in history to attend a Gym's Grand Opening 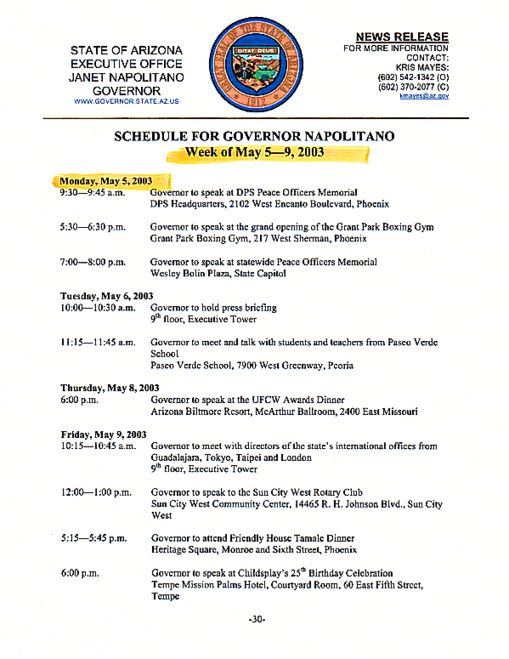