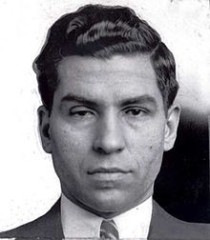 Charles "Lucky" Luciano (The Real General) - In 1945, i was a kid. I never met Lucky Luciano. As I tell this story, Lucky's lawyers and associates went to see a lawyer in Jersey City, New Jersey. His name was ANDREW O. WITTREICH﻿. Who in 1961 became my lawyer in Tenafly, New Jersey. The lawyer that represented Luciano gave some federal indictment papers to Mr Wittreich and asked what could be done. He also gave two envelops full of cash to Mr Wittreich. Two weeks later, they went to Mr Wittreich's office and he told Mr Luciano if he takes his case, he would die in prison. "Go back to the old country, and live in comfort." Luciano let himself get deported. By the way, Mr Wittreich took his key and opened his bottom drawer in his desk, and gave the two envolpes back to Mr Luciano's lawyer. Lucky Luciano said to Wittreich "Your an honest man." My lawyer for many years to come.

Andrew O. Wittreich was the head in the democratic party in Hudson County, New Jersey. He became an alcoholic and later contributed many other things that you see and read in Alcoholics Anonymous (AA). He quit the democratic party when he found out that he was betrayed by John V Kenny, known as the "Little Guy". With Major Hague, who was major for 30 years, Andrew Wittreich got along. He moved to Bergen County in New Jersey and changed his affiliation from Democrat to Republican. Years later, Mr Wittreich lost the eye site in one of his eyes, so I drove him to all his court appearances. After a days work, I would pick him up from his home on Westervelt Ave in Tenafly, New Jersey and drove threw snow storms and always got to court on time. He gave me my first book on Thomas Jefferson, and taught me quiet a bit that i didn't know about the Constitution of the United States.