After the Oscar De La Hoya fight, Luis Ramon "Yory Boy" Campas (YBC) left Top Rank  and signed with me. Was Top Rank worried that I, Joe Diaz, would find out about their corrupt dealings with YBC?  They used their corrupt agents, John Montano, Mary rose Wilcox in the Arizona State Boxing Commission and Peter McKinn, their henchman, to try and destroy YBC and myself.

John Montano pulled our boxing licenses embarassingly just before the start of a boxing match.  It took YBC almost a year to regain his license and it took me five (5) years to show the fraud they perpetrated against me and regain my license.

Read the following section and see the scam they consistently pulled.  I believe they even fixed the fight between Oscar De La Hoya (ODLH) and YBC.  ODLH is a great fighter and a Great World Boxing Champion and this is not to detract from his accomplishments.  I believe, now, that he did know about the fix (this is after we have reviewed FBI information and tapes exposing how fights were "fixed").   Watch the Video.

Google the "De La Hoya Campas" fight and watch the whole fight.  Listen to the announcers.  ODLH had never gone past the sixth round and the betting line was six and a half (6 1/2) rounds. ODLH clearly won  the six rounds but YBC was still in the fight in the seventh round and when his corner men, Romeo Cularte Sr & Jr, "threw in the towel" YBC was surprised.  Note they did that with twelve seconds left (12) in 7th round, to make sure the fight was over the betting line.  YBC was in shape and ODLH was out of gas, the perfect setting for a YBC knockout.

Look at this contract issued to Yory Boy Campas in 2001 to fight Oscar De La Hoya.  Why did they have him sign a different contract just weeks before the fight in 2003 for less money? (both are below) 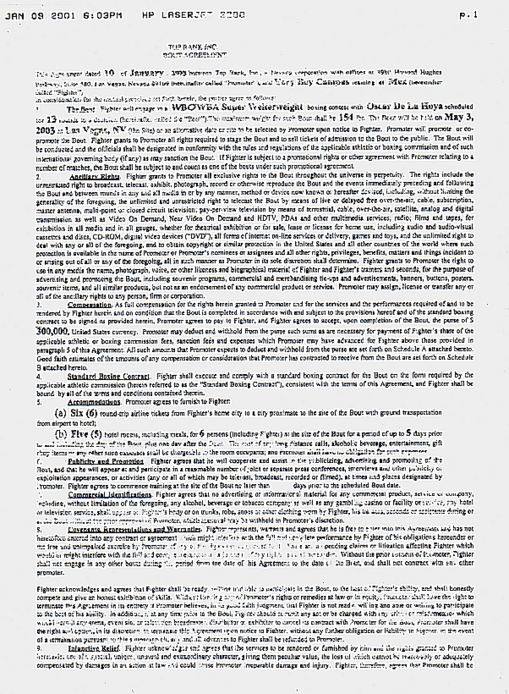 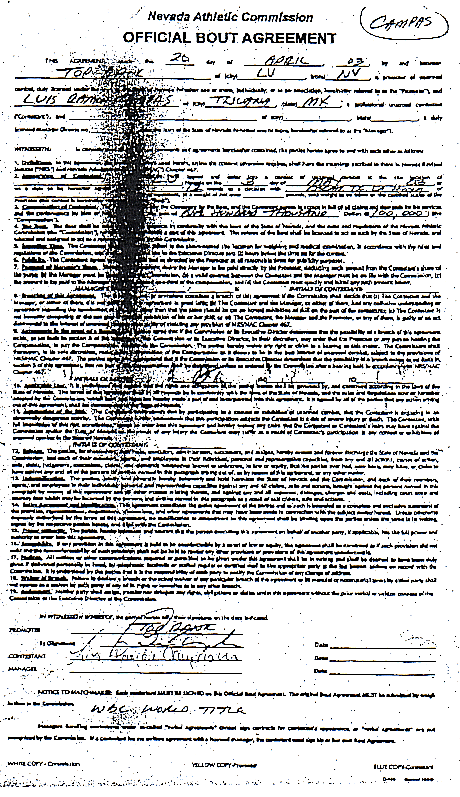 There are a lot of questions about the following checks and the trail the purse money took (landering) which was paid to Yory Boy Campas.  Mark Ratner, the then head of the Nevada State Boxing Commission (NVSBC) and Keith Kizer, present head of the NSBC should have investigated such flagrant discrepancies in deductions (shown below) which were taken from Yory Boy Campas's check.  Also they should have investigated why the full check amount was not issued after the fight to Yory Boy Campas instead of processing it through Star Trucking Co.

Below is the check stub for YBC issued after the fight.  Notice irregularities in the deductions- Items #3 & #4- the Double WBC Sanction Fees- there should only be one sanctioning fee per fight.  Item #5- Top Rank actually deducted the $20,000 phony advance check amount (shown above).  Item #6- The IRS witholding was only 10% so why the 30% witholding tax.  Then #7 the manager license is usually only about $125 per fight- why the $1,000 deducted?  Last the test for drugs is only around $100 so why the $10,000 deduction?﻿ 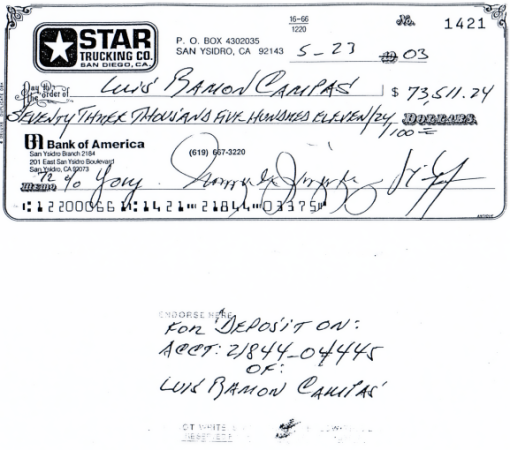 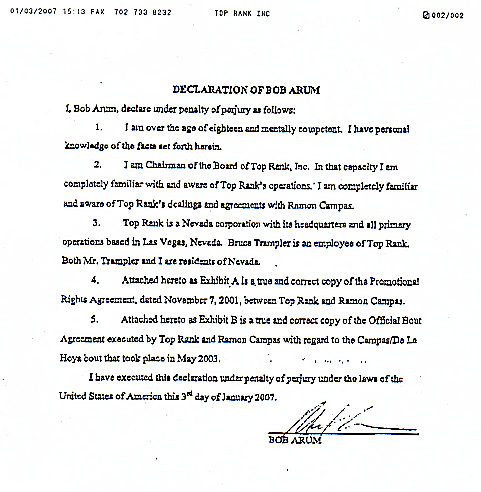